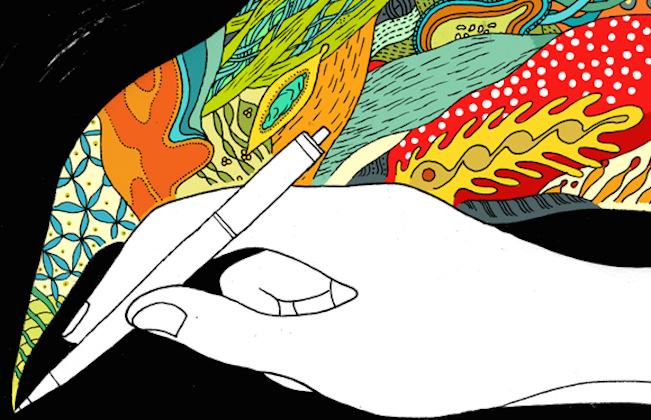 “Read the manual.” Yeah, no. That’s really not how my right brain works. I’m more of a show me kind of girl. Subscribing to the ‘pictures are worth a thousand words’ schtick, I often put the words on the back burner. Dual brain that I am, they had to escape occasionally in essays, journaling and sometimes even found their way into poetry — or my version of it.

Since my husband died, I’ve done a lot of leafing through memory lane, which apparently was paved with a heck of a lot of writing, including reams of poetry. I wouldn’t bore you with most but this one seemed still relevant to the journey we all take at some point in our lives.

Yet, still it comes,

As a brittle wisp or

I am woman not girl;

I am a survivor.

I offer my shoulder,

if welcomed; if not,

I gather them up

as I turn to leave.

I am not my past

I’m not the wrong page.

But a new page.

I don’t flinch or run—

Unless I am pushed.

And then I walk

And then I cry

And then I learn.

So much has transpired since I wrote those words, including more than 25 years. Worlds have collided and then some but reading this pseudo poem now, I realize that since that woman I was wrote it, she has kicked some serious ass. That questioning, earnest, crazy chick celebrated and grieved, was deliriously happy, fiercely proud and constantly anxious. She was a daughter, sister, wife, mama, grandma, as well as a wife, divorcee, wife again and now widow. At times, she felt both less than and more than she ever thought she could be. She was a product of her time, sometimes ahead of it; sometimes behind. And however she found her way here, I’m stuck with her.

Today there’s a hell of a lot more years behind than ahead of me. And how that makes me feel depends on the day. On the plus side, I (mostly) make better choices, know dead-ends when I see them and am resigned that those stretch marks are here to stay. I’ve learned a lot about marriage, mothering, and widowhood, but I’m not dumb enough to think I have a lock on anything at all. Babies, dogs, cats and pretty much everything once filled my house except birds because I drew the line there. I packed lunches, made big Saturday breakfasts, was a brownie leader, and brought oranges to soccer games. I was both the good and bad mom cop, again depending on the day and the issue. I knew long nights of colic as I also would know long nights of waiting up for keys to turn in the door.

I was every mom. I was you.

Now I’m just me, whoever that is. And those words? That poem? I guess I never knew how true they’d become, which is actually a good thing, considering the bumpy ride they had to get here. The detours, slippery paths, the screwy, scratch your head maps that made no sense until they did. Wisdom came alright, but often as “bitter medication”. Homes outgrew the family, the family outgrew even more. I had to invent, then reinvent a person I sometimes didn’t recognize but, out of necessity, had to get to know. Then again, don’t we all?

So here I am, in my reluctant new life and it was the toughest trip I’ve ever taken. Every inch felt like a mile; some days it still does. Having traveled life in so many different incarnations, I didn’t see this one coming. No one does. But after two years, and nearly 7 months (who’s counting) the ground beneath me doesn’t feel as unsteady and most days, I keep my balance pretty well. I’ve given myself permission to laugh — and cry, with mascara running, whenever the moment hits. I’d like to say I’ve achieved bad hair day freedom but I’m just not that evolved.

I want to live my poem now. I’ve earned it. I’ve paid the dues, bear the scars to say for real that “I don’t melt. I don’t flinch or run unless I am pushed. And then I walk. And then I cry. And then I learn”.

That I have. You have, too.